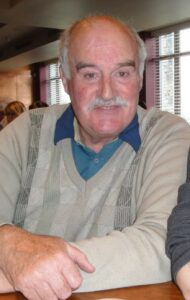 Just days after the passing of Fergus McCauley, old teammates and supporters were sad to learn that Jimmy O’Donnell, another stalwart of the great Cavan teams of the 1960s has gone to his eternal reward. Jimmy was born in Kilnaleck but when he was three years old his family moved to live in Manorhamilton. He received his second level education in St Patrick’s College, Cavan where he won a McRory Cup medal in 1955. In his youth Jimmy played for the Seán McDermott’s club in Manorhamilton, for Leitrim in the All-Ireland minor final of 1956 and for Leitrim seniors in three Connacht finals in the late 1950s.   He was also a regular on the Connacht Railway Cup teams. In 1962 Jimmy took up a position with the Ulster Bank in Cootehill and he transferred to the local Celtics club with whom he played in the 1964 Cavan senior championship final.  He began playing with Cavan in 1963 and throughout the remainder of the decade he was one of their best known players. He was an outstanding forward and helped Cavan to many of their great victories in the 1960s. His best position was on the ‘forty’ although he often played in the full forward line and occasionally at midfield when needed. He was very much part of the legendary clashes between Cavan and Down in the 1960s which are often recalled as both counties vied for supremacy in Ulster. He won Ulster championship medals in 1964 and again in 1967 when Cavan defeated Down on both occasions. He was part of a great team of the 1960s who came so close to winning an All-Ireland but fell agonisingly short particularly in 1967 losing by a single point to Cork in the All-Ireland semi final. In 1965 he moved to work in Granard and he started playing football with the local St Mary’s club and he helped them to double Longford senior championship successes in 1966 and 1967. Cavan GAA extends its deepest sympathies to his sisters Mary, Catherine and Ann, brother Anthony and their extended families.