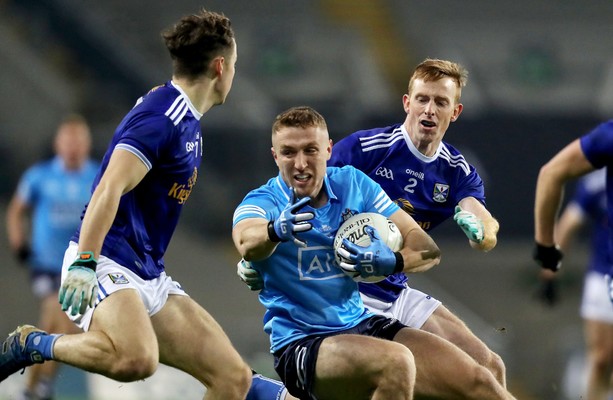 Cavan’s championship odyssey came to an end at a cold and deserted Croke Park as they were well beaten by six-in-a-row seeking Dublin.

Cavan were well in the game throughout the first half but alarm bells were ringing by the end of the third quarter when the Dubs led by double scores, 0-16 to 0-8, and the favourites finished in commanding fashion to run out 15-point winners.

At half-time, the home side were leading by 0-12 to 0-7 but Cavan would not have been too inconsolate as they headed down the tunnel.

Their first-half performance was littered with unforced errors – the Breffni men appeared, like so many other sides, spooked by facing the peerless five-in-a-row champions – yet, at five down, they were still in touch.

Cavan started on the front foot, James Smith winning the throw-up and finding Martin Reilly, who opened the scoring just 15 seconds in.

Ciaran Kilkenny levelled matters for the Dubs but after good work from Ciaran Brady, who had an excellent first half, James Smith fired over Cavan’s second.

Dublin responded well, Brian Fenton and Robbie McDaid raising white flags, but when Thomas Galligan took a pass from Gerry Smith and sent over a super point, Cavan were level at 0-3 apiece and all seemed to be going according to plan.

However, a strange nervousness seemed to enter Cavan’s play in the run-up to the water break. A succession of uncharacteristic mistakes gifted possession to Dublin and Con O’Callaghan and a hat-trick of Dean Rock points (one free).

Fenton and Rock added further scores before Gearoid McKiernan sent over a free after a good run from Ciaran Brady.

Kilkenny raised another white flag but Cavan replied with a free from Chris Conroy after Johnny Cooper had felled Martin Reilly but the Blues were forced into some last ditch defending on a couple of occasions as Dublin moved ominously through the gears.

Rock and Small added two more points but Oisin Kiernan, one of Cavan’s best performers on the day, sent over a super score to make it 0-12 to 0-7 at the halfway mark.

Cavan needed a fast start to the third quarter but Dublin got it with three points in succession from O’Callaghan, Fenton and Paddy Small and although Conor Madden fired over a lovely point in reply, Cavan were sending out distress flares all over the field.

Martin Reilly deflected over a certain goal for Kilkenny as Dublin surged further in front.

In the final quarter, Cavan played a lot of long, high ball into the full-forward line but Dublin dealt with it expertly. The impressive Martin Reilly scored two quality points, McKiernan landed a fine one himself and James Smith blasted over from close range to make it a nine-point game with as many minutes on the clock.

But the goal Dublin had been threatening arrived when they forced a turnover and walked it in, McDaid getting the final touch, and Dessie Farrell’s charges cruised home with a couple of late points.

While it wasn’t Cavan’s day, they battled to the end and will certainly learn from the experience; they can be happy with their winter’s work.