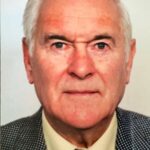 There was genuine sadness in Cavan GAA circles when the news emerged on Tuesday last that John Joe O’Reilly, formerly of Crosserlough, had passed away in Talbot Lodge, Malahide, Dublin. Cavan County Board extends its deepest sympathies to his wife Kitty, his sons Declan and Ronan, daughters-in-law Angie and Lorraine, grandchildren, brother Fay, nephews, nieces and extended family. John Joe’s passing evoked many memories of his whole-hearted displays for Crosserlough, Cavan and Ulster in the 1960s and 1970s.

John Joe played for Cavan juniors in the All-Ireland semi-final victory over Cork in 1962 and after the final against Meath he was drafted into the senior team for the National League in the autumn. During the next decade he was one of Cavan’s best-known players and he had an outstanding career in the Cavan jersey. He usually played at centre half-forward, popularly known as the ‘forty’. The legendary clashes between Cavan and Down in the 1960s are often recalled as both counties vied for supremacy in Ulster. Down were a new force in football winning All-Irelands titles in 1960 and 1961 but they often came off second best when playing against a great Cavan team. John Joe played in five Ulster senior finals winning championship medals in 1964, ’67 and ’69 and all victories were achieved against Down. His displays for Cavan earned him a call up to the Ulster panel and he played on the provincial team in the late 1960s winning a prestigious Railway Cup medal in 1968. Playing colleagues of that era recall John Joe’s leadership qualities, his physical strength, his ability to win possession, his skill in laying on the near perfect pass to his fellow forwards and above all else his sportsmanship.

The O’Reilly family is steeped in Crosserlough and John Joe made an enormous contribution to his native club playing with them for 20 years. From 1966 to 1972 Crosserlough were the outstanding club team in Cavan and their run of seven senior championships in a row is a record in Cavan football. John Joe was one of a small number of Crosserlough players who played in all of their seven-in-a-row victories and he captained the team to league and championship success in 1968. He also won five Cavan senior league medals. John Joe continued to play with Crosserlough in leaner times up until 1980 and he provided leadership, example and encouragement to many younger players. He will be sorely missed by his wife, family and many friends.