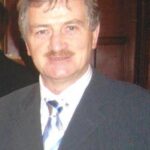 There was widespread regret in Cavan and far beyond on Wednesday last when the news broke that Enda McGowan had passed to his eternal reward. His passing brought back many memories among old playing colleagues and supporters of his many whole-hearted displays for Ballyhaise, Cavan and Ulster.

Enda was a native of Manorhamilton, Co Leitrim and in 1965 he moved to Cavan to work in Ballyhaise Agricultural College. He threw in his lot with the Ballyhaise club and his displays earned him a call up to the Cavan senior team in 1967. For the next eleven years he was one of Cavan’s best-known defenders – a key player on the great Cavan teams of the latter 1960s and early 1970s. He won Ulster championship medals in 1967 and in ’69 and played on the unsuccessful final teams of 1968, ’76 and ’78 (captain). He also won a McKenna Cup medal in 1968. When he retired from playing he served as a selector for a number of years in the early 1980s.

Enda was a teak-tough defender who tackled ferociously but always within the rules. He was often described as ‘tigerish’ who never gave up on a ball. He was fiercely competitive and how often in the Cavan defence as a ruck of players fought valiantly to win possession was it echoed by the anxious supporters ‘McGowan has it’. Sure Enda would emerge with the ball on his trademark solo run and clear to safety.

His displays for Cavan earned him a place on the Ulster Provincial team and he found himself in a unique situation in his first Railway Cup final in Croke Park on St Patrick’s Day 1970. Enda lined out at left half-back on a star-studded Ulster team. His direct opponent playing at right half-forward for Connacht was Fr Harry O’Carroll. Enda and Harry were next door neighbours from Manorhamilton, former school pals and members of the Leitrim minor teams of 1963 and ’64. Enda came out best that day; he held Fr Harry scoreless and Ulster went on to win the Railway Cup. He was chosen as an All Star replacement in 1970 and he enjoyed a trip to San Francisco with the country’s best players. He won another Railway Cup medal in 1971.

Enda was a loyal club man who turned out week after week for Ballyhaise and served the club with distinction for many years. He won a junior league in 1965 and an Intermediate championship in 1968. He played in the county senior championship finals in 1976 (captain) and 1978.

Cavan County Board extends its deepest sympathies to his wife Anne, his daughters Jennifer, Claudine and son Ciarán, his sister Vicky, grandchildren and extended family.