Andy McCabe:
Cavan County Board GAA extends its deepest sympathies to the daughters, Carmel, Breda and Andrea, sons Damien, Drew, Ronan, Neil, Colin and Keith, brothers, sisters and extended family of the late Andy McCabe formerly of Crosserlough who passed away last weekend at his home in Kingscourt. Andy was predeceased by his wife Bridie in 2015.
Andy’s death evoked memories of his many whole-hearted displays for Crosserlough, Cavan and Ulster. He usually played at right full-back or more often at left full-back during which he was one of Cavan’s best-known footballers in the 1960s and 1970s and he had an outstanding career in the blue jersey. The legendary clashes between Cavan and Down in the 1960s are often recalled as both counties vied for supremacy in Ulster. Down forwards such as Seán O’ Neill, Paddy Doherty and James McCartan wrote their names indelibly into history but they often came off second best when playing against Cavan. Andy played a key role in many of these encounters. He was a teak tough defender who led by example and he played the game with passion and motivated his teammates to do likewise. He was a strong forceful player and fiercely competitive. One sure way of getting the loyal Cavan supporters excited was when Andy emerged from defence with the ball often leaving an opposition player or maybe two in his wake! He won Ulster senior championship medals in 1967 and again in 1969 as Cavan defeated Down on both occasions. His displays for Cavan earned him a call up to the Ulster panel and he was a key player on the Ulster team for a number of years in the early 1970s winning prestigious Railway Cup medals in 1970 and 1971.
Andy also made an enormous contribution to his native club where his usual position was centre half-back. He captained the Crosserlough minor team to championship success in 1963, the senior team to league victory in 1964 and two years later in 1966 he captained the great Crosserlough team to the first of their seven in row run of championship wins. It was a measure of Andy’s leadership ability and maturity that he was entrusted with the captaincy of the Crosserlough senior team at 19 years of age. He is one of a number of Crosserlough players who played on all their seven-in-a-row run of successes. Andy continued to serve with the club in leaner times during the early 1980s when he provided leadership, example and encouragement to the younger players.
Ar dheis Dé go raibh a anam. 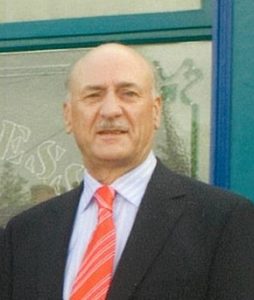 Michael Lyons:
Cavan County Board also remembers Michael Lyons, Drumalee who passed away recently. Michael was an outstanding goalkeeper for his native club. Many can recall clearly the many outstanding saves he made in the Centenary county final of 1984 when Laragh United beat Drumalee. This game was played in Ballyconnell in recognition of the fact that the town was the birthplace of the GAA in Ulster. Michael didn’t concede any goals though up against a highly potent Laragh attack and he almost single handedly kept Drumalee in the game. When Michael finished playing he continued to work tirelessly for the GAA both at club and county level. He was the true volunteer who gave of his time unselfishly to whatever GAA activity he was involved in. He was a constant worker in particular for Cavan Youth Board. He was a referee, an umpire, a coach, an administrator, a steward, fundraiser and a great supporter. When he reached the age of 40 he started playing with the Cavan Masters and he was the proud holder of two All-Ireland Masters medals won in 1993 and 1996. In recent years he was a familiar face at the rear of Kingspan Breffni where he was to be seen selling tickets for the Youth Board’s 50/50 draw. Michael did whatever needed to be done and he did it with good humoured banter while he related funny anecdotes to his many friends who recall him as a gentleman. Cavan County Board extends its deepest sympathies to his wife Monica, his sons Mark, Declan, Dominic, grandchildren, brothers, sisters and extended family. Michael’s funeral mass took place in the Cathedral of Ss Patrick and Phelim recently with interment in St Brigid’s cemetery, Killygarry.
Ar dheis Dé go raibh a anam.