Tyrone were convincing winners of Sunday’s Ulster SFC semi-final replay at Clones and bagged five goals at Clones to progress to a first provincial decider since 2010.

Peter Harte scored 2-4, his two goals within a minute of each other in the first half giving Tyrone a cushion they were never to relinquish. Subs Mark Bradley and Rory Brennan also found the net in the second half while Connor McAlliskey ran 80 metres before drilling the ball past Raymond Galligan for his first championship goal.

Cavan scored 2-7 in the last 10 minutes however, the cushion was too great and Tyrone march on to face Donegal in the Ulster final on July 17. Cian Mackey and Jack Brady hit the goals at the end of a disappointing day for Cavan, who came into the game with high hopes after scoring 3-7 (to Tyrone’s 0-16) in the drawn game two weeks ago.

Cavan had a good penalty shout turned down in first-half injury-time when they were trailing by seven points, but there was only one team in it in a second half which lacked intensity and atmosphere. In front of 20,223 at St Tiernach’s Park, the sides were level five times in the opening 19 minutes.
David Givney, who’d bagged two goals in the drawn game two weeks ago, opened the scoring after winning a ball in the air and there were signs that Cavan could find room in the Tyrone defence again. Cathal McShane had a great first half for Tyrone and his ninth-minute point levelled things at two points each. 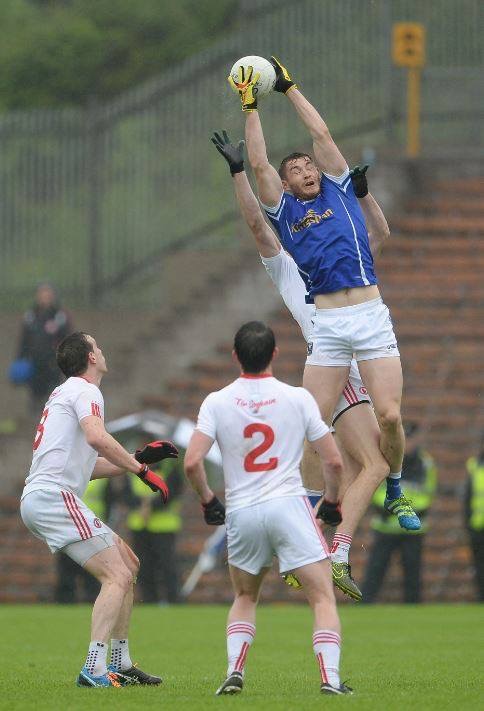 Tyrone took the lead three times in the next nine minutes through Mattie Donnelly, McShane and Connor McAlliskey but each time Cavan hit back through Killian Clarke, Cian Mackey and Martin Reilly – all six points from play.

Both sides were probing and pushing, without committing too many men forward and Tyrone content to concede Cavan’s short kickouts before trying to dispossess them further up the field. Justin McMahon, one of two late Tyrone replacements before the game along with Ronan McNabb, formed a two-man sweeper screen with Colm Cavanagh which Cavan were unable to penetrate.
At opposite ends Eugene Keating, a late change for Seanie Johnston, and Ronan O’Neill struggled for accuracy but the game was still coming to the boil nicely. Then it exploded into life with Peter Harte’s two goals inside a minute.
First patient build-up involving Donnelly, Sean Cavanagh and McShane, who popped the last pass through to the onrunning Harte who drilled the ball high into the roof of the net after 23 minutes. Before Cavan had time to regroup, the green flag was raised again when Tiernan McCann, not known for his finishing, found himself bearing down on goal.
He should have passed, but was tackled by Raymond Galligan and when the ball fell loose, Harte was there to tap it in from close range. Tyrone scored an unanswered 2-3 inside 14 minutes to take control and they led 2-8 to 0-5 before Gearoid McKiernan ended a 16-minute scoring drought for Cavan.

Tyrone survived a let-off in first-half stoppage time when Tomas Corr appeared to be tripped in the square amidst a sea of legs and bodies, but David Coldrick waved play on to leave Tyrone with a 2-8 to 0-7 interval lead.

The second half started slowly and once McAlliskey ran 80 yards to nail home Tyrone’s third goal, the game was over as a contest. Cavan got turned over inside the Tyrone ’45’ and Sean Cavanagh slipped the ball to McAlliskey, who ran the length of the pitch, ignored all options and had the confidence to drill the ball low into the net for a spectacular goal.
There was no way back for Cavan, and it got worse when Rory Brennan scored a fourth within 20 seconds of coming on as a sub in the 50th minute after McAlliskey’s unselfish pass across the square. Cian Mackey tapped home the rebound from Padraig Faulkner’s shot in the 60th minute but it was damage limitation stuff.
Bradley tapped home Tyrone’s fifth in the 71st minute, but Cavan kept going with Gearoid McKiernan points and Jack Brady’s goal in the sixth minute of injury-time.